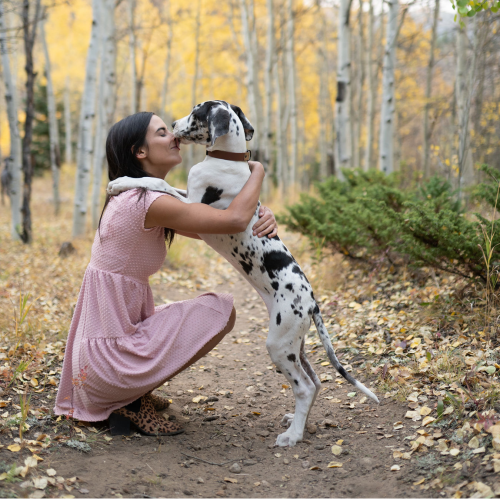 What kind of dog is Scooby Doo?

Kids and adults across generations may not have much in common, but they have one thing: the original series Scooby Doo.

Whether you are 65 years old or a 5 year old kid, you’re bound to know the famous Scooby Doo dog character.

For decades, cartoons have been trying to live up to Hanna Barbera productions level of popularity, with Scooby Doo, but have failed.

This is probably because Scooby Doo has something for everyone.

For the kids, he’s a lovable and silly dog who gets into all sorts of wacky hijinks.

For adults, he’s a nostalgic reminder of their childhood with a bit of mystery thrown in.

But for everyone- the mystery remains: what is Scooby Doo’s breed?

WHAT KIND OF DOG IS SCOOBY DOO?

For years, this mystery cartoon has been stated to be a Great Dane.

But, do his physical features and personality match up to the Great Dane breed?

Scooby Doo is mostly black with a brownish muzzle and chest.

He has white paws and wears an orange and green collar with a license plate that reads “SD” (for Scooby Doo).

His ears are droopy and he almost always has his tongue hanging out of his mouth.

Scooby is also quite large- he towers over his human companions Shaggy, Fred, Daphne, and Velma.

In fact, Scooby is so large that he is often mistaken for a bear or other wild animal!

According to the American Kennel Club, Great Danes are “powerful, large and muscular” with a “long and strong” muzzle.

Their ears are also droopy like Scooby Doo’s, often described as “elephant-like.” Some Great Danes ears are cropped, which makes them stand upright.

Great Danes come in many colors, but the most common are fawn (a light tan), brindle (a dark tiger-stripe pattern), blue, black, harlequin (a patchwork of black and white), and mantle (mostly black with a white chest).

Many Great Danes also have a small amount of white on their paws and chests.

Interestingly enough, the AKC also notes that Great Danes are “gentle giants” who are “patient and loving with children.”

They are also very friendly dogs who love to be around people.

10 things you should know about Great Dane Dogs

So, based on appearance alone, it’s easy to see how Scooby Doo could be a Great Dane.

But what about the rest of his character?

Scooby Doo is best known for being a bit of a scaredy-cat. He’s often afraid of ghosts, monsters, and other things that go bump in the night.

However, he’s also very brave when it comes to protecting his friends and solving mysteries. In fact, Scooby is often the one who comes up with the plans to catch the bad guys!

Great Danes are also known for being gentle and loving, but they can also be very brave dogs.

Great Danes have a heart as big as their size. They are loyal and protective of their families, but they are also gentle and loving.

They are known for being great family dogs.

So, based on his personality traits, it’s easy to see how Scooby Doo could be a Great Dane.

Except for… the mystery of how Scooby Doo handles being in sticky situations….

Despite his size, Scooby is a total scaredy-cat.

He’s always the first to run away when things get too spooky for him.

But that doesn’t mean he’s not brave- when push comes to shove, Scooby is always there to help solve the mystery, even if it means putting himself in danger.

So, does Scooby Doo and his tendency to be a bit afraid match up with a Great Dane?

HOW DO GREAT DANES HANDLE SITUATIONS THEY ARE AFRAID OF?

The Great Dane breed can be generally pretty timid.

Great Danes are real characters when it comes to their choices of what they are afraid of.

Sometimes a Great Dane might have logical fears, like being afraid of the fireworks or loud sounds.

Other times their fears might be more random, like being afraid of plastic bags, strangers, umbrellas or other animals.

But despite their fears, Great Danes are still brave dogs who will stay loyal to their families when it matters most.

Scooby Doo may be a bit of a mystery, but there’s no doubt that he shares many characteristics with the Great Dane breed.

Now let’s discuss some of the ways that Scooby Doo was able to find great success.

Even though Scooby Doo might be afraid of some silly things, he had a way of being quite the mystery machine when it came to helping his owner, Shaggy Rogers, out of sticky situations.

Scooby Doo is pretty scrappy. He always seemed to know how to protect Shaggy from the villains.

For example, in the episode “A Clue for Scooby Doo,” the gang is trying to solve the mystery of who is stealing food from a local restaurant.

After following some clues, they discover that it is actually a group of hungry ghosts!

Scooby Doo uses his quick thinking and bravery to help Shaggy escape from the ghosts.

In another episode, “Scooby Doo and a Mummy Too,” the gang is trying to solve the mystery of who is terrorizing a local museum.

After following some clues, they discover that it is actually a mummy!

Once again, Scooby Doo uses his quick thinking and bravery to help Shaggy escape from the mummy.

So, even though Scooby Doo might be afraid of some things, he is still a very smart and brave dog.

Scooby Doo is a great example of how even the most timid dogs can be brave when it matters most.

Now the question remains, is a Great Dane a match for Scooby Doo and his wit’s?

Although some dog breeds may take the cake on this one, a Great Dane is definitely no stranger to intelligence.

The breed has been known to be quite resourceful and have a sharp memory.

There are many stories of Great Danes who have solved complex problems and been of great assistance to their owners.

Since from the beginning, a Great Dane was bred as a hunting dog, most Great Danes have the drive to perform jobs in real life.

IS SCOOBY DOO A FOOD LOVER?

So much so, actually, that he’s always getting himself into trouble because he can’t resist following his nose to a good mystery.

But, dog lovers know that most dogs love snacks. So, how much does the drive for food really match the Scooby Doo breed to a Great Dane?

If you have a Great Dane, you know that they are a dog breed that will do just about anything for a good snack.

A Great Dane puppy is highly motivated by food.

This is not surprising when you consider that, as hunting dogs, they were bred to have a high drive for food. They absolutely LOVE treats!

This trait has been passed down through the generations and is one of the things that make Great Danes such great dogs.

Great Dane Not Eating – What to Do

Scooby Doo is a character who is known for his love of people.

In almost every episode, Scooby Doo is shown to be friendly and loving towards the people he meets, even if they are strangers.

He is kind to Scrappy Doo and all of his friends including Daphne Blake, Fred Jones and Ken Spears.

Scooby is the kind of dog and character who can make the other characters feel happy, just by being around him.

A Great Dane typically is a huge social butterfly.

They may be large dogs, but they are also some of the most loving and gentle dogs around.

Their size can be intimidating to some people, but once you get to know a Great Dane, you will see that they are just big softies.

They love people and enjoy being around them. This dog breed is one that absolutely is the kind of dog you want to add to your family, even if you have kids.

WHAT COLOR IS SCOOBY DOO?

Scooby Doo’s color is brown. He has a light brown fur with dark brown spots.

He’s got a long tail and bowed legs, which is likely just the way the cartoon character was designed.

Cartoons tend to exaggerate characters at times, so we can assume that in real life, he has normal dog legs.

WHAT COLOR ARE GREAT DANES?

The Fawn color resembles the Scooby Doo breed! Check it out:

SO, WHAT KIND OF DOG IS SCOOBY DOO?

From analyzing Scooby Doo and his character, how he acts, what he looks like and what he loves, it is easy to see that Scooby Doo is a Great Dane.

He has all of the characteristics of a Great Dane, from his love of food to his gentle and loving nature.

The next time you watch cartoons and Scooby Doo pops up, take a closer look and see if you can figure out what kind of dog he really is. Chances are, you’ll see a Great Dane.

Likewise, the next time you see a Great Dane in real life, try to watch it and see if you can figure out if it resembles a ‘Scooby Doo Dog Breed’.

You might be surprised that if you see a Fawn Great Dane, it probably looks like a ‘Scooby Doo Dog’.

THE MYSTERY IS SOLVED

So, there you have it!

A Great Dane is the perfect match for the Scooby Doo character.

Both dogs are intelligent, resourceful, friendly, loving and gentle.

Plus, they both love food! If you are ever wondering what kind of dog Scooby Doo is, do your research on the Great Dane dog breed.

Whether it’s his appearance, personality, or even the way he handles being in sticky situations, Scooby Doo is the epitome of a Great Dane.

Do you have a Great Dane that shares some of Scooby Doo? Let us know!

Read More:
The Best Collars for Great Danes
Great Dane Farts: The Funniest Collection of Photos and Videos on the Internet

Miniature Great Danes: The ‘Pocket’ Version of a Great Dane