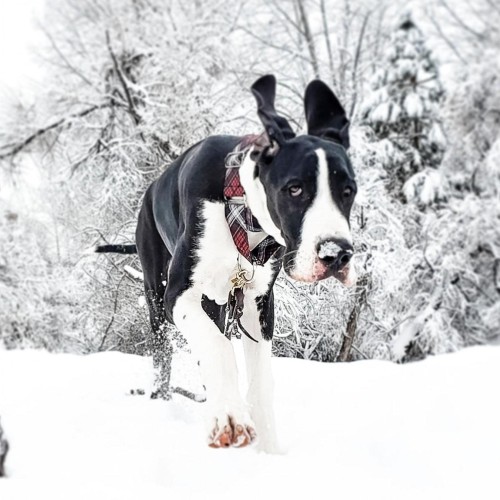 I’m going to go there. We need to talk about Euro Danes.

I will preface this by mentioning that I believe, fully, that every dog deserves love and a home. No dog should be cast out because it doesn’t fit some mold we’ve created. As a matter of fact, both of my Danes are true underdogs. Love the dog in front of you.

What is a Euro Great Dane?

The term ‘Euro’ is used to describe Great Danes with a certain look. These are the traits commonly associated with the ‘Euro’ Dane:

Many people love and prefer the ‘Euro’ look in Great Danes, and purposefully seek it out when choosing a breeder.

What Does Euro Mean in Great Danes?

Great Dane breeders that sell ‘Euro’ Great Danes typically make it very clear on their websites and social media that their puppies are ‘Euro’ or have a percentage of ‘Euro’ in them.

If we look at the written standards for Great Danes, both ‘American’ (GDCA) and ‘European’ (FCI) Great Danes are nearly identical.

If a breeder is breeding dogs according to the written standards outlined by nearly every Country (including Europe, the U.S. and Canada), they look like Great Danes, Apollo dogs. Not the ‘Euro’ Great Danes as we know them.

Bad Breeders
Scam Breeders: What to Look For
Breeders: Shady Business
Should I Choose a Breeder or Rescue?

(BELOW: European fawn and brindle Great Danes. Notice that they are not refined nor are they too droopy).

Many European breeders that follow the written standard for Great Danes are understandably frustrated that the word ‘Euro’ has been attached to dogs from their Country, effectively changing the overall perception of what European dogs actually look like.

If they do, it’s because the breeder is breeding off-standard ‘Euro’ Great Danes, not because they are ‘European’.

Off Color and Designer Great Danes

Great Danes were originally bred in Germany, and it is believed that they were a cross between English Mastiffs and Irish Wolfhounds or other sighthounds.

A bred to standard Great Dane is neither ‘hypertype’ nor is it ‘hypotype’.

Many people believe that ‘American’ Great Danes are too refined. However, a well-bred Great Dane that meets the written standard is a large, robust dog!

Every breeder and Great Dane owner will have an aesthetic preference, and some variance of the standard is normal depending on the pedigree.

‘Euro’ and ‘American’ are simply marketing terms that indicate a dog was bred out of standard.

The term ‘Euro’ has become a catch-all for dogs that are overweight, heavy, stocky, and often very poorly structured.

Somehow, breeders have made the term ‘Euro’ sound desirable.

The word ‘Euro’ is most often used by backyard breeders and often as a means to glorify or justify breeding dogs that often (though not always) have serious structural and health faults.

Because there is no written standard for a ‘Euro’ Dane, there are no checks and balances. This is a key point.

Health, structure and temperament problems abound in Great Danes, and it all comes back to unethical breeding practices in both standard breeders and ‘Euro’ breeders.

With the term ‘Euro’, anything goes.

When a breeder imports a ‘Euro’ Dane to use in their breeding program, they often believe (as do the buyers) that being ‘Euro’ is enough to merit that dog as quality breeding stock.

What we are seeing in the popularity of Euro Danes is a progressive issue that is absolutely devastating to the Great Dane breed.

Euro Danes are becoming more and more ‘Euro’, and are looking less and less like actual Great Danes.

Bad Breeders
Scam Breeders: What to Look For
Breeders: Shady Business
Arthritis in Great Danes
What is Bloat?
Can You Prevent Bloat?
Stomach Tacking: Pros and Cons
Bloat and Gut Health
The Scary Bloat Timeline

This is the reason we have written standards (checks & balances); for the overall health and longevity of the breed.

Recently we’ve begun seeing ‘Euro’ Danes that are so droopy that they cannot see because excess skin obstructs their eyes.

The older they get, the more gravity does its job and the more likely they are to suffer from additional irritation and other preventable eye problems.

The Great Dane written standard (both European and American) state essentially that eyes “shall be medium size, deep set, and dark, with a lively intelligent expression. The eyelids are almond-shaped and relatively tight, with well developed brows. Haws and Mongolian eye(s) are very serious faults.

Fat Great Danes are not healthy nor are they normal. Fearful, anxious or ‘protective’ temperaments are not actually in line with the breed standard either, however, all of these things tend to be ‘common’ among breeders that promote ‘Euro’ litters.

We cannot justify these health problems by saying that ‘It’s ok, he’s Euro‘. Being ‘Euro’ does not make it ok for a dog to be heavy, unable to see or struggling to move gracefully.

Many breeders focused on ‘Euro’ type Great Danes will indicate that their puppies have a specific percentage of ‘Euro’.

Short of actually genetically testing every puppy in a litter, it’s impossible to definitively state how much of the ‘Euro’ lineage one dog may have received from its ancestors.

This is a sneaky marketing tactic meant to make ‘Euro’ puppies sound more desirable and appealing than Great Danes that have a long pedigree of beautiful standard well-bred dogs.

Ethical breeders care very much about health and structure before droop.

Some breeders will say that their dogs, Euro or otherwise come from ‘Champion lines’.

Tread cautiously with this. Ask to see pedigrees and the titles that were awarded. Anybody can put a bunch of ‘Euro’ Danes into a weekender ‘dog show’ and award made up ‘champion titles’. The exotic ‘European’ names may be an additional draw.

Not all breed and pedigree registries are created equal. Unfortunately, this practice may in some ways dilute the value of a true AKC or Canadian Kennel Club Champion titled dog.

THE APOLLO OF DOGS

A well-bred Great Dane from parents with a quality, studied pedigree is an absolutely stunning dog.

They are elegant, athletic, robust, large, and have incredibly stable and confident temperaments.

Some breeders are highly focused on preserving and improving the original Great Dane Breed type.

They study their pedigrees and work to actively minimize and eliminate congenital and genetic problems in the breed, including bloat, wobblers, heart disease, eye problems and more.

This is the work of a quality, ethical and thoughtful breeder.

If you are interested in more of the ‘Euro’ look in Great Danes, make sure you are choosing breeders that first truly care about health, structure and longevity.

It may seem exotic and unique to import a dog or to choose a dog from imported lines, but we encourage you to take a good look at what ‘Euro’ actually means.

A little extra droop in the jowls is one thing, but hiding poor genetics and breeding practices behind the word ‘Euro’ is another.

HOW TO FIND A REPUTABLE GREAT DANE BREEDER

Look for and verify:

We encourage you to be patient and thoughtful when searching for a breeder for your next Great Dane, especially if what you want is purposefully bred out of standard in some way (designer color, ‘Euro’, mixed breed Dane, etc.).

This list of resources will be helpful to you if your idea of ‘Euro’ vs. ‘American’ Danes has been challenged by this article! We are here to educate and help:

The Federation of Deutsche Dogge Clubs

The Time Traveler (Book, the History of Great Danes)

Miniature Great Danes: The ‘Pocket’ Version of a Great Dane

Do you like modern positive+balanced off-leash dog training, science-based information, life with Danes, educated ownership and chatting with other like-minded people?