When a dog is rude, aggressive, snappy, or out of control, that is a sign of dominance, correct?

What if I were to tell you that the concept of ‘dominance’ is not only deeply flawed but seen largely by actual professionals as a potentially harmful ‘woo’ theory with no scientific basis?

What is Great Dane Dominance Training, and is it still relevant? I’m going to answer these questions today!

Note the concept of ‘dominance’ in dog training is SO ingrained and was so popular that information like this can elicit some defensive reactions, especially if you are working with a trainer that still utilizes this ideology. We understand this, but also believe that education is power. Many veterinarians still advise clients to utilize ‘dominance’ and ‘alpha’ based training techniques, however keep in mind that their training is largely in medicine, not behavior.

WHAT IS GREAT DANE DOMINANCE TRAINING?

Dominance and alpha theory are basically the idea that our pet dogs are essentially jockeying for a position at the ‘head of the pack’, and that a lack of alpha-style leadership is why they are aggressive, fearful, rude, or poorly behaved.

The belief is that by relieving the dog of its ‘alpha’ status, it will be calmer, more balanced and less likely to run through doors, pull, jump, bark, hump, resource guard or react poorly towards children, people and other dogs.

Captive wolves behave very differently from wild wolves, so it is especially interesting that people are so committed to this concept. The latest research indicates that wild wolves do not fight for alpha status, and their packs are developed as family units with the mother and father as the natural, benevolent leaders.

The original scientist behind these flawed studies of captive wolves, David Mech, has since completely retracted his original captive-wolf findings.

The concept of the ‘alpha dog’ and domesticated pets as we know it is both deeply flawed and not accepted by modern science.

HOW TO ‘BE THE ALPHA’ TO A GREAT DANE

Believers of the alpha/dominance theory will say that it’s important to ‘be the alpha’.

So, what does ‘being the alpha’ mean? Typically, it involves training that looks like this:

In multi-dog homes, some people even believe that the ‘snappy’ or super confident one is the ‘dominant’ or ‘alpha’ dog and that it should be fed and pet first so the other dogs recognize its ‘position’ in the pack.

Pack walks have become a popular way to showcase ‘control’ of a large pack of dogs, but note that while interesting and impressive to see, walking face-forward on hard pavement and ignoring interesting things is not actually a ‘natural’ activity for a dog, even in a ‘pack’.

Even if our house dogs were always trying to become the ‘top dog’ and leader of the house, do these behaviors below (commonly seen as ‘dominance’ or ‘alpha’) truly exemplify a quality, benevolent, mature leader that can maintain the health and well being of a pack:

Do you have a dominant Great Dane that is showing aggressive behavior? Read our blog post on aggression to learn more about Great Dane behaviour.

IS MY GREAT DANE BEING AGGRESSIVE OR PLAYING?

Barking – Barking is a symptom of anxiety, stress, boredom, habit and genetics. A dog that is over-excited or anxious is not a dog that is ‘dominant’ or ‘protective’.

Resource Guarding – Resource guarding is a natural behavior where dogs will protect something that they see as important. It has everything to do with fear, genetics and past experiences. Truth? If somebody tried to take MY ice cream cone from me, I’d snap too. That doesn’t mean it’s acceptable behavior, but it does give us a much better idea of how to prevent and treat it.

Nipping – Dogs that bare teeth and even go so far as to nip towards dogs, strangers and children are not doing so to establish themselves as some kind of leader or alpha. They are doing it because they are afraid and often because earlier warning signals (stiff body, hackles, growls, avoidance) were either ignored or punished.

This is not to be confused with puppy biting, another natural behavior where puppies learn to control their jaws…not control you.

Pulling & Walking Ahead – dogs that pull have learned somewhere along the way that pulling WORKS. Humans are slow and boring, pulling fixes that problem. Pulling and walking ahead are signs that a dog needs more mental enrichment, training, and positive relationship building (a desire to engage with you as the handler)…not that they are trying to be the boss.

HOW TO TEACH A GREAT DANE TO WALK ON A LEASH

Destruction – dogs that destroy things are most often bored, anxious, frustrated and immature. They don’t do this out of spite, and it’s definitely not a play to be the alpha.  Lack of appropriate mental and physical exercise paired with poor management skills (crates, gates, and keeping things put away) often define this behavior.

Not Listening – Dogs that don’t listen often have ‘selective’ hearing because they don’t have a strong, positive relationship with their owner, need more repetitions in their training, haven’t been properly trained/taught how to do something, have been punished and are avoiding the situation, or are over-excited or anxious about the environment. Again, the root causes have very little to do with ‘alpha’ behavior and dominance.

Who respects or listens to a harsh authoritative figure? I don’t. I check out, get myself out of the situation, or shut down. Just like a dog would.

Humping – Humping is a sign of overstimulation and anxiety. There is nothing about the immature, out of control behavior of ‘humping’ that tells the humpee (is that even a word?) ‘hey, I’m the boss okay?’. This would be similar to believing that the child who eats glue is the ‘alpha’ kindergartener in a classroom.

Aggression – Leash aggression is especially common (dogs that act like fools on a leash, but fine with other dogs when off). This happens because a dog feels trapped on a leash, there is a lot of tension in the neck when they lunge/pull or are corrected, and they cannot express the normal body language. Off-leash aggression is also driven by fear, past experiences, genetics, and otherwise.

Aggressive dogs are NOT ‘alpha’ or ‘dominant’, they are more likely fearful, insecure, have poor genetics, and/or have poor social skills.

This is not all to say that dogs don’t need leadership. It’s important to understand when you are learning how to control a Great Dane that they DO need us to take the reins! They need our guidance, respect, time, and understanding.

Dogs also need training and lots of socialization. No dispute there, as a matter of fact, it’s incredibly important! (If you have a new puppy, we highly recommend you grab a copy of our Great Dane Socialization guide):

Have a Great Dane Puppy?

Check out our positive socialization guide.

Pinning/alpha rolls and other scary, forceful physical corrections are known to increase aggression and anxiety.

Dog training is not meant to be a power struggle. To view it as such is to literally miss the point.

We owe it to our dogs to not boil everything down to ‘dominance’.

Reality Television is not the best place to get dog training and behavior advice.

It’s fun to watch a ‘dog whisperer’ magically transform an out of control ‘dominant’ dog into a calm, submissive pet in 20 minutes. This kind of television is engaging and believable.

Yes, the energy you use with your dog matters, but nothing will replace actually training your dog and developing a positive relationship based on trust, benevolent leadership and guidance.

It’s not actually that difficult to intimidate a dog into appearing ‘fixed’ for a 20 minute prime TV slot, and fluff it up with fascinating ‘dog psychology’ so you don’t see that the dog is actually incredibly stressed.

Don’t fall for showmanship. It’s the oldest trick in the book!

GIVE YOUR DOG A JOB

One thing that the dog whisperer does get correct, however? Dogs NEED much more physical and mental enrichment than we tend to give them.

Recognize and understand the true, studied root cause of their behaviors (not dominance but rather fear, confusion, boredom, anxiety or pain) and start there.

Provide your dog with plenty of games, enriching activities, sports, and consistency.  A dog is never too old to learn new positive behaviors.

Remember, you already control their food choices, where they sleep, when they get to go out or take a walk or eat dinner, and their day to day access to enrichment and activity.

How much more ‘alpha’ do you really need to be? 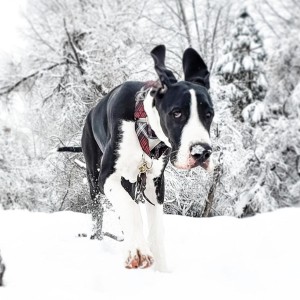 Is My Great Dane Puppy Knuckling?

If you’re the proud owner of a Great Dane, you know that they can be a

Gentle Leader vs. Prong Collar: Which is Better for Your Dog?

There are a lot of different options available when it comes to choosing a dog collar.

There are many reasons to e-collar train your dog. Some people may be hesitant to use

5 Big Dog Myths You Need to Know About

The large and giant breed dog communities are a literal stew of opinions, advice and ideas.